Thanks to all the 31+ attendees to our 6th meetup and to Laco for the venue and for the nice drinks and food that followed. 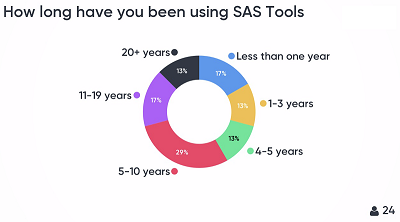 Quite a lot of highly SAS experienced users tonight 😉

The first talk was held by Vasilij Nevlev ({An}alytium Ltd) who introduced Ansible and SAS.

Ansible is a tool that helps to automate configuration management, installation management, applications deployment, and so on, having them coded. The automation is performed by the use of playbooks composed by some text files in yaml format, templates in ninja2, using several levels (up to 24) of variables definition.

With his demo, in only 15-20 minutes a working SAS 9.4 installation was obtained on top of several newly created and configured virtual machines. Ansible is not officially supported on SAS 9.4 but is now the core of the SAS Viya installation.

After a short break and a funny sasensei game, Steven Hofmans (SAS Institute Belux) talked about the SAS Customer Intelligence 360.

Currently, marketing analyses rely on really simple models (commonly called A/B testing): first-click, last-click,… However, the real buying behavior is much more complex, so those models are not enough relevant to establish an efficient customer strategy.

SAS CI 360 proposes models that allows to analyze the full path and each step (interaction) followed by the user during its buying process. This finer analysis gives the marketing the opportunity to clearly identify where their investments has the bigger chance to produce a higher ROI, provided the required data are correctly and fully recorded.

Photos from the event are available on Meetup.

Our next meetup will be held on 24th of October in House of Innovation in Antwerpen, and kindly hosted by SBI Consulting.

Cheers and see you next time!